English - Français
In 13 Photos and a Testimony: Experiencing the Life of a Refugee

October 3, 2019 — On September 22nd, Jesuit Refugee Service Canada once again carried out A Journey Into Exile. It is an exercise which, with a somewhat playful style, seeks to help participants to immerse themselves in and experience the reality of being a refugee.  This time, the event was part of the Journées de la Paix (Days of Peace) in Montreal.

For more details about the dynamics of the exercise, click here.

And here are some pictures of the most recent edition: 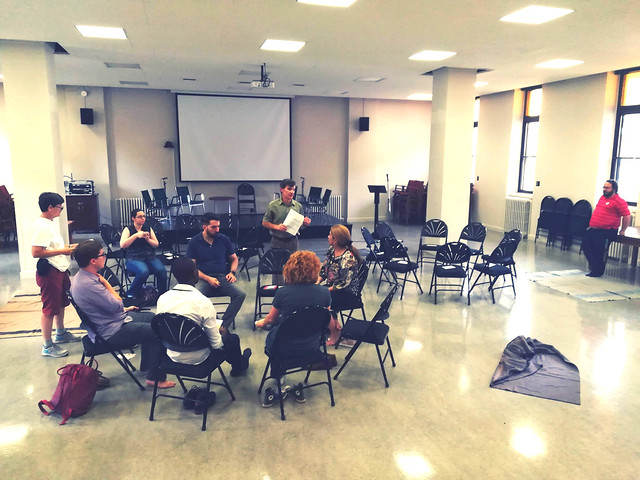 Eleana Jaramillo, participant in the exercise, talks about her experience, which echoes that of others:

"When one faces the reality of migrants and refugees, there is real fear. But it is when I don't know, when I don't have any preparation to deal with the subject or when I'm not even interested in knowing their reality that I become the most distant and indifferent. This increases my fears and doubts.

Doing the exercise A Journey into Exile, taking on their identity, their history and path, allowed me to feel their pain and fear. To me, the game was over at the end of the session, but for other human beings, it is always part of their reality. Jesus invites us to recognize the suffering of the other and to take immediate action! A call for 'help' is what stays with me from this exercise."

Norbert Piché, Country Director of the Jesuit Refugee Service Canada, explains how the idea of these assimilation exercises came about.

"When I experienced the Kairos Blanket Exercise, which helps us feel the dispossession that the Native people of Quebec and Canada experienced, it challenged me to create something similar, to show the experience of a refugee. Too often we forget that refugees are people like you and me who have been uprooted because of a tragic situation beyond their control. So I wanted participants to put themselves in the shoes of a refugee so that we would stop judging them by what is said in the media and start treating them as we would like to be treated ourselves."

Recent News
"A man of great simplicity and great depth": Canadian Jesuits remember Fr. Adolfo Nicolás
May 11, 2020 — What was Fr. Nicolás' impact on Canadian Jesuits and the Jesuit Province of Canada? What contributions did he offer to Jesuits around the world? We present here the testimonies of four Jesuits from Canada and an international one.
Ordinations in times of pandemic: Society of Jesus welcomes new priest and five deacons in Toronto [WITH VIDEO AND PHOTOS]
May 25, 2020 – In two of the more memorable and elegantly simple ceremonies in recent history, Terrence Prendergast, SJ, Archbishop of Ottawa-Cornwall, ordained 5 deacons and Kevin Kelly, SJ (CAN), to the priesthood.
Fr. Michael Murray
Father Mike Murray died on 18 May, 2020 at the Ajax Pickering Hospital. He was in his 83rd year and had been a Jesuit for 63 years. He served as the first director of Anishinabe Spiritual Centre. In 2010, was appointed as President of Loyola High School in Montreal.
Fr. Charles Sitter
Father Charlie Sitter died peacefully on May 9 at René Goupil House in Pickering, ON. He was in his 94th years and was a Jesuit for 75 years. He had a passion for books and art and thus, he would serve his various communities as house librarian and artistic decorator.
Fr. Francis Xavier Johnson
FX Johnson died on 3 May at René Goupil House, Pickering. He was 93 years old and in his 68th year as a Jesuit. In 1969, he began his long career as a parish priest, hospital chaplain, and pastoral worker and spent a lot of his Jesuit life on the move from one pastoral assignment to another.
Fr. Norman Dodge
Fr. Norm Dodge died peacefully in the Lord, surrounded by fellow Jesuits, on May 2 at Rene Goupil House, Pickering. He was 92 years old and was a Jesuit for 67 years. He was well suited to pastoral care ministry, always with a cheerful disposition, patient and a good listener.
Update regarding the Covid-19 outbreak at the Jesuit infirmary community in Pickering, Ontario
May 11, 2020 — The Jesuits of Canada have made the decision to temporarily close René Goupil House, the Jesuit infirmary community in Ontario, and to transfer most residents to two facilities with specialized COVID-19 care wings.
view all news

Mission
The Society of Jesus - Serving the Catholic Church for the greater glory of God.
Get Involved
Click here to find out the various ways you can become involved with the ministries, apostolates, and spiritual way of life of the Canadian Jesuits.

Find out how you can support the many ministries of the Jesuits and assist us in strengthening our 400 year old mission in Canada.

Loyola House / Ignatius Jesuit Centre
Built in 1964, Loyola House in Guelph, ON has welcomed over 60,000 people of all faiths to deepen ...

Find a retreat center near you

Find a parish near you