English - Français
Jesuits of Canada, colleagues and friends celebrated the Feast of St. Ignatius of Loyola

“So whether you eat or drink or whatever you do, do it all for the glory of God. Do not cause anyone to stumble, whether Jews, Greeks or the church of God— even as I try to please everyone in every way. For I am not seeking my own good but the good of many, so that they may be saved. Follow my example, as I follow the example of Christ.”
(1 Corinthians 10:31-11:1)

August 8, 2019 — On July 31st, the Jesuits of Canada celebrated with two special Masses the feast of St. Ignatius of Loyola, founder of the Society of Jesus. At the same time, this date marked the first year of the newly formed Canadian province. Jesuits, colleagues and friends came from all over.

In his homily, he played with songs and words to then compare God’s grace to the work a music coach performs when helping shape up a young voice. “The key to a good teacher is the ear he or she needs in order to hear the natural talent of an aspiring singer. It’s not a matter of building a voice, but about chipping away what gets in the way of what’s already there.”

Fr. Oland connected this type of experience with St. Ignatius of Loyola’s life and spiritual journey. “Ignatius knew this. God needed to work hard, first to have his attention and then to begin the task of sculpting Ignatius into who he already was. Who was he? Ignatius saw himself as a latter-day apostle, a spreader of the Good News, a beacon of hope for the Church in crisis. Once he accepted God’s light, there was no looking back.”

Another mass was celebrated by Fr. Gilles Mongeau, SJ, at Our Lady of Lourdes parish in Toronto, Ontario.

Making reference to the first letter of St. Paul to the Corinthians and to one of St. Ignatius's deepest spiritual experiences, the vision at La Storta, he urged Jesuits and colleagues to keep Christ at the centre: “We celebrate today the first anniversary of our new Jesuit province of Canada… All of this (work) will be for nothing if we do not seek together the foundational grace of being placed with the Son, if we do not eagerly and generously seek to be a body that sorrows with Christ sorrowing in his migrant people, in his indigenous people, in his refugee people, in his Haitian people, in all our marginalized sisters and brothers, and to be a body that rejoices with the joy of the risen Christ among them.”

Below are a few photos from both celebrations and a recording of the mass at the Martyrs’ Shrine. 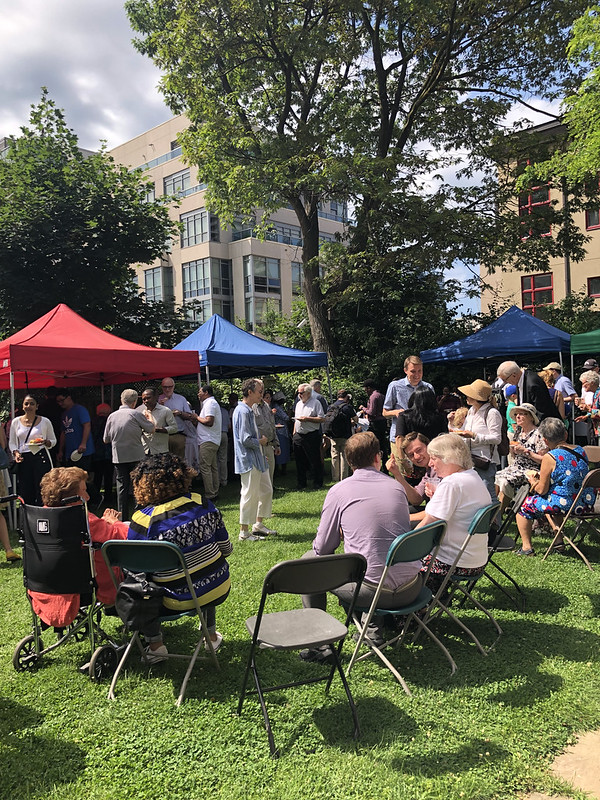 Recent News
God in a 45-minute Zoom: How the Spirituality Sector Adapts to COVID-19
July 13, 2020 — How do we reach out to people in a pandemic? How do we respond to their spiritual needs and promote a contemplative life while gatherings are banned?
Demetrius Michailides
Father Demetrius MICHAILIDÈS died at the Richelieu infirmary on the evening of June 25. He had joined the Jesuit community at the Richelieu residence in July 2016. He taught dogmatic theology at the Université Saint-Joseph in Beirut, as well as in Belgium and New York.
Finding God in a pandemic: Testimonies from Jesuits and colleagues
June 26, 2020 — In Canada, COVID-19 has had an impact on all aspects of our lives since March and we have already shared the changes it has brought to our work. However, as Frantz Georges S.J. reminds us, “the spiritual experience is fundamental in the lives of all Christians.”
Holy Cross Church in Wiikwemkoong vandalized, forced to close temporarily
June 22, 2020 – The Holy Cross Church in Wiikwemkoong, Ontario, founded and still run by Jesuits, was vandalized between Saturday, June 13 and the early hours of Sunday, June 14.
Multidimensional development: Empowering Haiti’s rural communities
June 19, 2020 — The Support Group for Rural Development (GADRU) is a nonprofit organization founded by Fr. Jean-Marie Louis, SJ, not only to oversee and promote the rights of those living in rural communities but also to participate in the construction of an inclusive, fair, and democratic society.
Brave enough to try: Marc-André Veselovsky, SJ, and Jesuit formation
June 17, 2020 — Marc-André Veselovsky is not only a Jesuit, but also a vegetarian, semi-professional singer, a lover of board games (some might say the more complicated ones…) and a good listener.
Journeying with youth at Cowork Magis: A space for start-ups in Paris
June 15, 2020 — Fr. Grégoire Le Bel, SJ, set up a coworking space in collaboration with a group of young people, first taking one office, then another, and finally an entire space designed according to the needs of these entrepreneurs.
view all news

Mission
The Society of Jesus - Serving the Catholic Church for the greater glory of God.
Get Involved
Click here to find out the various ways you can become involved with the ministries, apostolates, and spiritual way of life of the Canadian Jesuits.

Find out how you can support the many ministries of the Jesuits and assist us in strengthening our 400 year old mission in Canada.

Loyola House / Ignatius Jesuit Centre
Built in 1964, Loyola House in Guelph, ON has welcomed over 60,000 people of all faiths to deepen ...

Find a retreat center near you

Find a parish near you